Skip to main content
Fractures The Silence of Men

creation
Fractures The Silence of Men

from Wednesday to Saturday at 8pm, Tuesday at 7pm and Sunday at 4pm

Do you know the difference between an injury and a crack? The crack, it is permanent, however slight it may be, a crack does not heal or heal... What is cracked gives the feeling that it can break at any time.

A rapper, a slammer, a writer and a stage director, D’ de Kabal has been going around music venues, festivals, theatres and writing workshops for almost 20 years.
Having worked on how an identity builds itself when its main structure is the history of colonial slavery and its consequences having questioned what it is to be the victim of racist acts or words, he now explores a new field of thought, equally close to who he is : the notion of masculinity and the mechanisms of its construction. D’ de Kabal has been writing, listening, researching this subject since 2015. His has also dialogued with other men during workshops he created and calls: Laboratories of Deconstructing and Redefining Masculinity by Art and the Sensitive.
He says : “It was not about gathering mens’ words to make a show. More than anything else, these laboratories, allowed me to get closer to myself and to talk about subjects, which, until then, didn’t have a space to exist.”

In order, to embody his first creation at La Colline, D’ de Kabal calls on strong artists, either by their presence, either by the instruments they play (voices, machines, electric guitars, body, video). Hence, he questions: construction of masculinity in its foundation and virility worn like a protection, both of which industrially produce dominants and carry, what he calls, “masculine fundamentalism”. 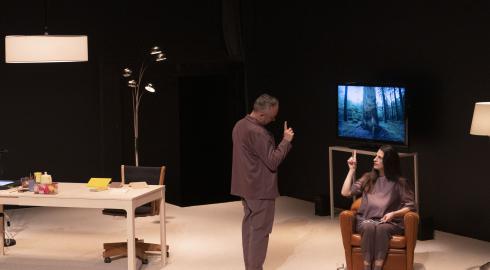 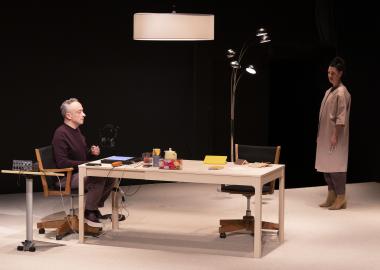